A dish named after the peppers that it contains is perfectly suited for a Powerful Pepper Company recipe. It’s taken me too long but I wanted to have a great recipe for everyone that they could follow. This recipe takes some time but if you make the amount I did you will end up with about 13-14 good servings of chili. Perfect for freezing and pulling out when you have a craving over the next year. I like serving chili on pasta, potatoes, nachos, or just in a bowl with some saltines or oyster crackers.

I found the proteins for this in a few places. I got the venison from a friend and the elk and buffalo blend from my friends at Prairie Harvest in South Dakota. You should check them out for some cool alternative meats and some seriously good dry aged beef as well. My half sister lives up in Spearfish and turned me on to these guys years ago. Hi Lynn! 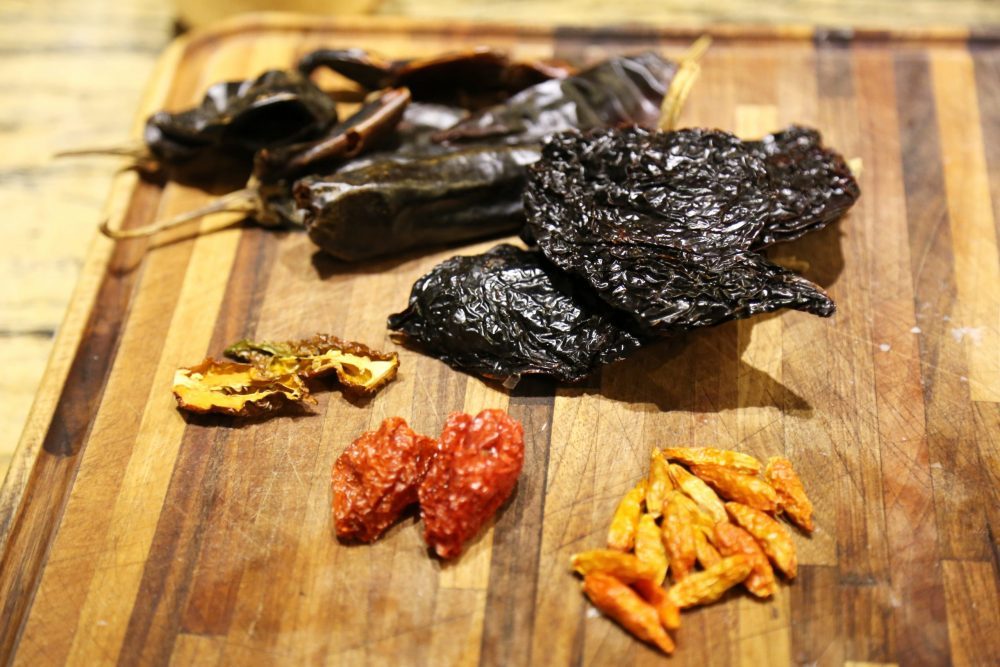 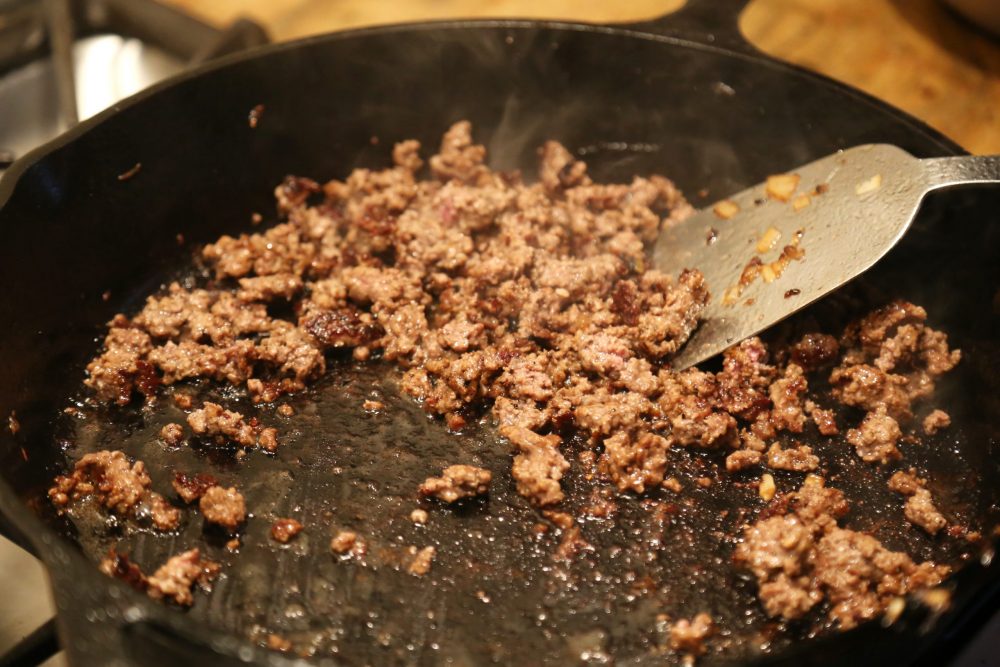 I’m going to get detailed in this one because I want each and every one of you to be able to make this fantastic chili. That being said, there are a few specific pieces of equipment that you will need to do this. A large cast iron skillet, a good 8 quart pot, and a blender.

I like to pull everything out of the cabinets so it’s all ready to go for this recipe. So go ahead and get all of your things prepped so that when it comes time to work with a hot cast iron you are not waiting on yourself to chop onions or look for the can opener.
—
Start this recipe off with the fun part. The Chili Magic. If you’re me, this means pulling out my huge box of dried chili peppers from the garden. If you’re not me, some of the chili peppers can be found in Mexican groceries or in the Mexican isle at the supermarket. If not there, take a look online. There are tons of dried chilis to buy and they are pretty inexpensive. 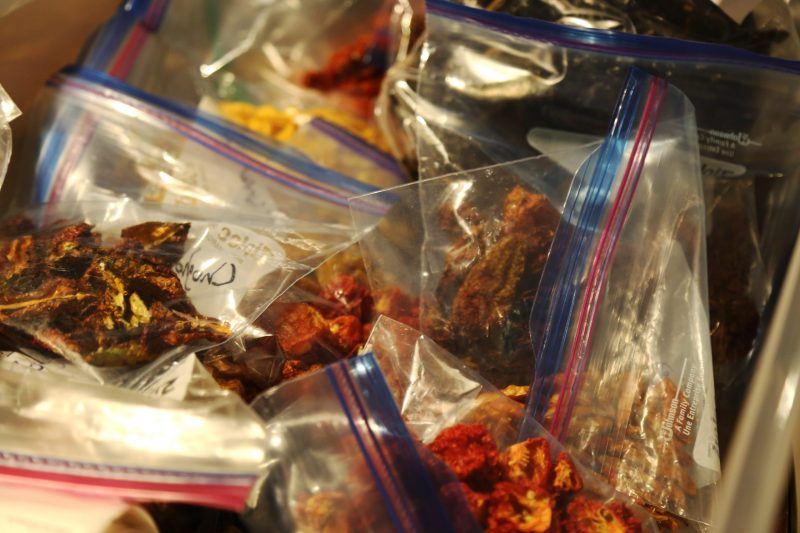 Get your Guajillio and Ancho dried chili peppers and start by removing seeds and stems. Nobody likes seeds and stems. The hot peppers should be stem free but they’re so small don’t worry about the seeds and such. I mean, that’s where the heat comes from…
Get a sauce pan and put the chili peppers in with about 2 to 2.5 cups water. Enough to just cover the chili peppers. Put on the heat and bring to a boil. Remove from the heat once it boils and set aside. We’ll come back to it later after it has a chance to soak and cool off. We are rehydrating all of the peppers for use in the chili later on. This mixture forms half of the base for the sauce that makes up the chili. Make sure to wash your hands after handling the peppers, even though they’re dry! 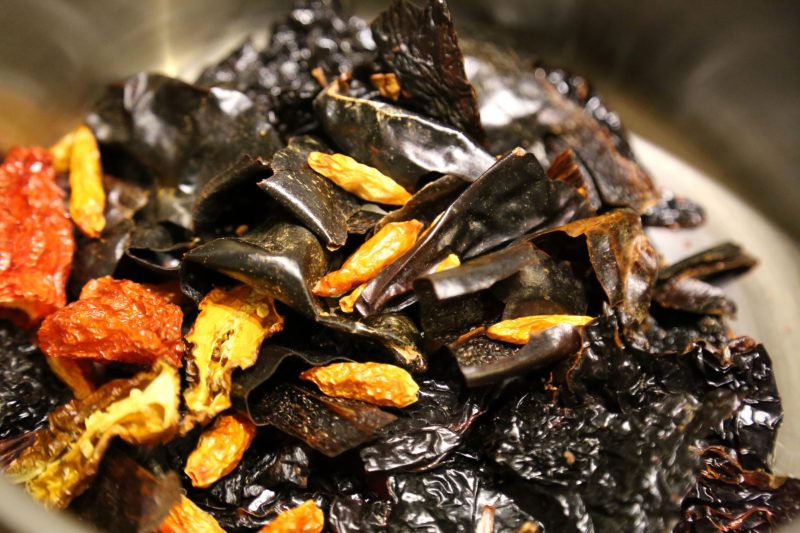 Make your chili drop powder by combining chili powder, cumin, and salt. Pro Tip: I toast whole cumin seeds and then grind them myself for elevated flavor.
Chop your onions if you haven’t already and set aside in a bowl. We are then going to move to the hot cast iron section of the recipe.
Set your cast iron over high heat and let it heat up until it’s smoking. You probably don’t need oil if you keep your cast iron pan well seasoned. Once it’s smoking start adding the venison, elk, and buffalo in batches. I do what I call “little burgers.” It’s important here not to disturb or stir the meat in any way for the first minute or two after adding the game because this is when the Maillard reaction occurs and you get all of that toasty steak flavor from the meat, i.e. think of them as little burgers. 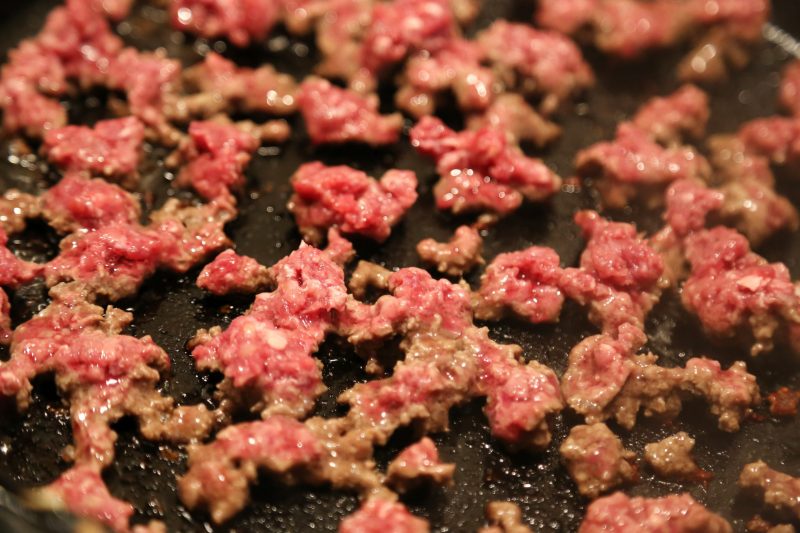 Once the meat has almost cooked all the way through on one side you can give it a flip and a stir and finish off the browning pretty quick. I did this about 4 to 5 times in my 14 inch cast iron. It might take you a few more batches with a smaller pan. Set the meat in your preferred large pot to cook the chili.
I like to add the chopped onions to the pan and brown in whatever fat is left from the beef. Our meat was lean, so we didn’t drain any excess fat  After two batches of meat, add half of the diced onions, stirring frequently, scraping the bottom of the pan until onions have good color.  Repeat. If you are using fatty beef, not to worry, just drain the fat before adding it to the cook pot. 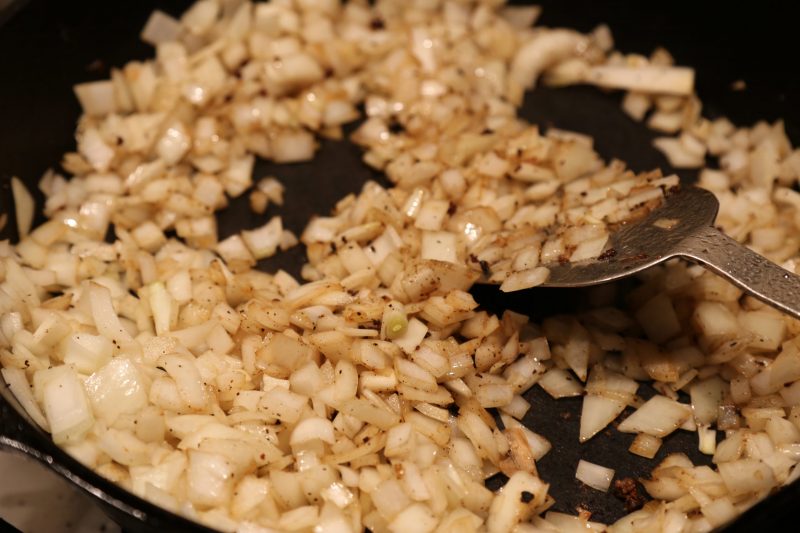 Once all of the batches of meat and onion are BGB (beautiful golden brown) get them in that cook pot if they are already there.
In blender, add the hydrated peppers and their pepper tea, 4 garlic cloves and 1 cup cold water. Blend to make the Chili Magic. 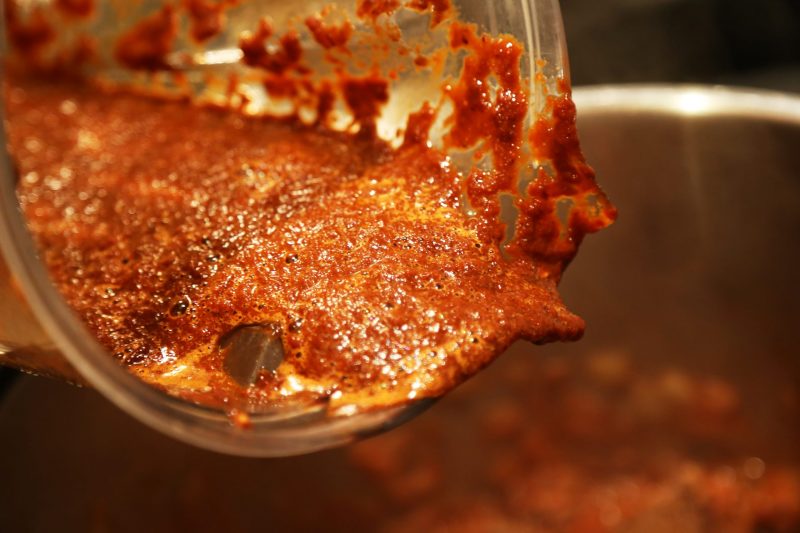 To the pot, add tomato sauce, diced tomatoes, and the chili blend, 2 tablespoons of chili drop mix and then bring to a boil.  Reduce heat and set 40 minute timer.  Stir occasionally to make sure nothing sticks to the bottom.  Keep on medium / low heat.
After 40 minutes add 3 tablespoons chili drop mix and set another 40 minute timer.
After that, add the rest of the chili drop mix and the black beans, 1 cup of water and cook over low for another 20-30 minutes, as desired to meld flavors. I like a tablespoon of cumin in the last 5 minutes of cooking to bring that flavor forward.
Time to serve. Pictured is a baked potato with habanero jack cheese, white onion and my Smoked Mango Habanero Sauce!