We’re going to start this website off with a doozie of a recipe.

Makes around 14-18 tacos depending on your tortillas. For a party look for street taco size flour tortillas they’re around 4 inches across you can get 25 street tacos easy out of this recipe.

This is a recipe that I don’t make very often because it takes forever, it’s messy, and somewhat difficult. But I do make it, and every time I do I’m not sad at all, because mouth-watering fragrant crispy pork tacos. Drool. 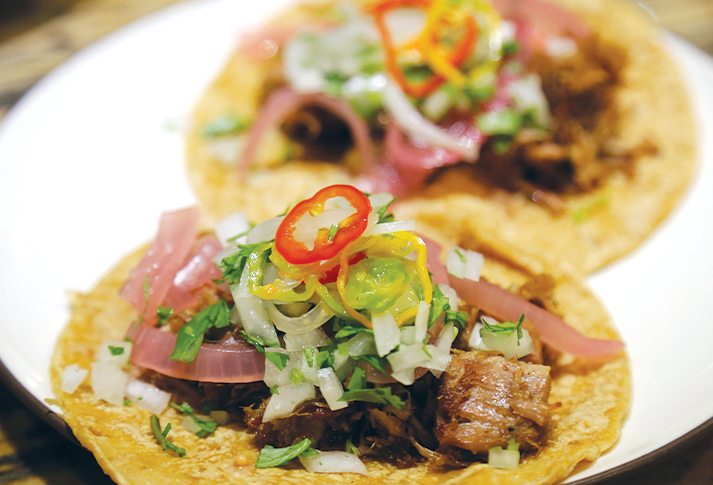 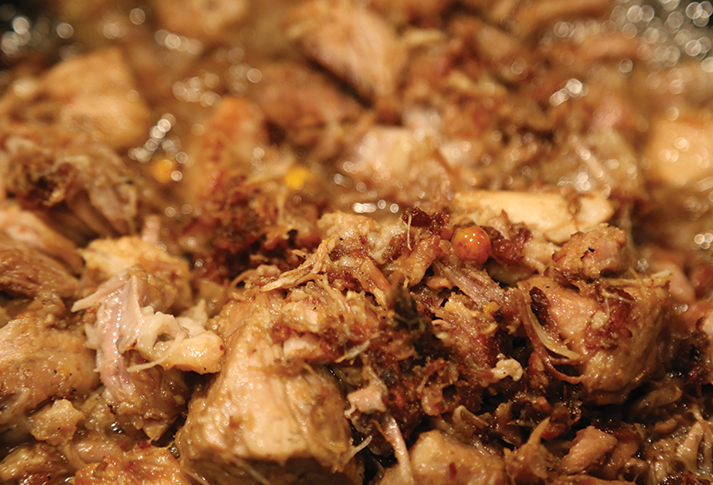 Add the pork chunks, fat still on, to a good size Dutch oven with some room left at the top cover with water to at least an inch and preferably two over the top of the pork. And crank up the heat until it boils. Turn it down to a simmer then skim the scum off of the top for 5 or 10 minutes and discard the scum. That’s right, you scum skimmer.

I used a vegetable peeler to get the orange zest off the orange. I had a big navel orange for this. I also added all of my spices and leaves and peppers and everything else to the pot willy-nilly. This turned out to be a bit of a bear later on when I went to pick out the cloves and cinnamon again at the end of the cooking time. You might want to make a sachet with cheese cloth and put the cinnamon and cloves in there so they are easy to remove later, alternately you could grind the spices, just use a bit less.

Cook for 1.5 hours uncovered and keep an eye on the water as it simmers to make sure it doesn’t fall below the level of the pork. If it does add some more hot water until it is covered. Remove the cinnamon and cloves at this point, they’ve done their jobs. Also that orange zest is just disintegrating at this point and is pure flavor leave it in.

After this the pork will shrink, the fat will render and you keep cooking it for another 30 minutes to an hour while the rest of the water boils away and the pork is frying in its own fat, yum. This get’s tricky here. You want to fry the pork and not burn it so you need to scrape the bottom of the pan and turn the pork over at whatever the interval is that it takes for the pork to be golden brown at the bottom. The cast Iron became a bit difficult at this point because of the heat and how it was sticking but I persevered. Anyway, there are 3 options at this point depending on how dedicated to carnitas you are. You can just keep it in the pot scraping the bottom until it looks pretty (like I did), you can drain the fat and put the pork under a broiler with a close eye on it until it’s browned, or you can drain it and put it in a non-stick skillet and sauté in some of the reserved fat until you have nice brown chunks.

Once it’s browned to your liking taste it, season with salt and pepper if it needs it and it’s time to dig in.

I like carnitas tacos with onions and cilantro and fiery habanero salsa and a few pickled red onions. You can also make carnitas burritos, Carnitas enchiladas, carnitas on a plate with rice and beans… I mean you can just eat them right out of the bowl they were cooked in. This stuff is amazing.